App replaces sleeping pills for insomniacs - Insomnia patients should ditch the drugs and sign up to an Australian-designed app to help them improve their sleep patterns.
New-age Origin still packs a punch: Holmes - The days of "punching anyone in the head" are over and Queensland's State of Origin preparation included watching an episode of children's t ...
Biden signs gun safety bill into law - US President Joe Biden signed into law the first major federal gun reform in three decades, days after a decision, which he condemned, by the Supreme ...
US companies give abortion travel benefit - US companies including Walt Disney Co and Facebook parent Meta Platforms Inc say they will cover employees' expenses if they have to travel for aborti ...
Believe in RBA to avoid recession: Lowe - If Australians don't have faith in the Reserve Bank's promise of a "narrow path" to avoid recession, they could end up being the cause of on ...
McKeown, mixed world record fires Aussies - Mollie O'Callaghan has made it a hat-trick of golds while leading the mixed 4x100m relay quartet to Australia's first global landmark at this year's w ...
Biden condemns US court abortion ruling - The US Supreme Court has overturned the landmark 1973 Roe v Wade ruling that recognised a woman's constitutional right to abortion, a decision condemn ...
NSW claim Women's Origin title in thriller - NSW have reclaimed the Women's State of Origin shield, winning a pulsating encounter against Queensland 20-14 with dynamic centre Isabelle Kelly winni ...
Afghanistan ends hunt for quake survivors - An earthquake that struck a remote mountainous area of Afghanistan this week has killed 1036 people and the toll is expected to rise, Mohamed Ayoya, U ...
Queensland drops some of its remaining COVID-19 vax restrictions - Mandatory COVID-19 vaccination requirements will be removed for visitors to residential aged care facilities, disability accommodation and prisons. ... 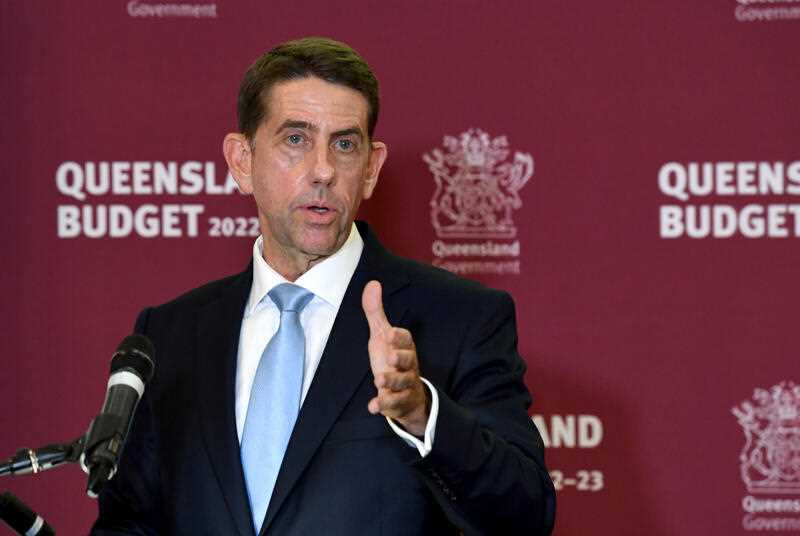 A record $23.6 billion investment in health is the centrepiece of Queensland’s State Budget handed down by Treasurer Cameron Dick.

That’s on the back of surging housing maket and coal prices with Mr Dick heralding that Queensland’s budget was "back in black".

The funding includes $9.78 billion over six years to build three new hospitals in Bundaberg, Toowoomba and Coomera, as well as a new Queensland Cancer Centre and 11 hospital expansion projects across Queensland.

Mr Dick says the government’s record health budget will provide access to the best possible healthcare, no matter where you live.

“Over seven years we’ll invest $943.5 million in the Building Rural and Remote Healthcare program to replace ageing health infrastructure and staff accommodation in rural and remote Queensland,” he says.

“We’re making sure the Royal Flying Doctor Service is adequately resourced, with budget funding of $334 million for a new 10 year-contract, while $60.2 million will go towards a new Queensland Regional Aeromedical Hub.

“Meanwhile, our Better Care Together plan for mental health, alcohol and other drugs services will inject $1.64 billion into the system across the next five years, ensuring better outcomes for Queenslanders and their families.”

The budget will deliver payroll tax cuts to small‑and‑medium-sized business,

Treasurer Cameron Dick said the budget delivered on the bipartisan recommendation of the Mental Health Select Committee to create a dedicated funding source for mental health, alcohol and other drug services.

“The bipartisan mental health select committee was clear, we must invest more through a dedicated funding source,” Mr Dick said.

“The 2022-23 Budget delivers on this recommendation, with the creation of a mental health levy on large businesses with national payrolls of more than $10 million.

“The levy will impact less than 6000 businesses in Queensland, including 850 businesses with national payrolls of more than $100 million.

“It will inject $1.64 billion into the state over five years to improve mental health and wellbeing and combat substance abuse."

Mr Dick says at the same time it is also cutting payroll tax for small-and-medium-sized businesses with payrolls up to $10.4 million.

The government projects this will provide benefits of up to $26,000 per year for more than 12,000 small-and-medium-sized businesses.

“As a result of these changes, only the top one per cent of large Queensland businesses will pay more," he says.

Under the arrangement, larger businesses with a payroll of more than $10 million will need to pay a levy of 2.5 cents for every $10 of taxable wages they pay above $10 million.

Very large businesses, who have payrolls of more than $100 million, such as major supermarkets, will pay an additional levy of just five cents for every $10 of taxable wages they pay above $100 million.

“Over 63 per cent of that outlay will be spent outside the greater Brisbane region, a total investment of around $9.8 billion that will support 31,100 jobs.

$200 million has been allocated to proactively address housing land supply challenges in the south-east.

The Catalyst Infrastructure Fund (CIF) will receive $150 million in equity funding for the major infrastructure needed to continue the delivery of new communities such as Ripley Valley and Greater Flagstone.

An additional $50 million in equity funding has been approved for the new Growth Acceleration Fund to invest in the trunk infrastructure needed to develop residential lots and increase dwelling supply.

The Palaszczuk Government will invest $16.5 billion in school and early childhood education.

“The budget also features $742 million for additional and renewed infrastructure in our existing state schools, as well as $20 million to upgrade school playgrounds and tuckshops,” he said.

“A further $3.6 million will go towards the planning and design of 18 new school halls and performing arts centres.”

Education Minister Grace Grace said there would be around $650 million over the next five years for renewal projects at existing schools.

“The Palaszczuk Government delivers for all of Queensland, and that’s why we’ll invest around $650 million on hundreds of infrastructure upgrades right across the state," she said.

“That includes $181.5 million for major renewal projects at 36 schools, $108.9 million for six special schools, $43.2 million for projects in all 18 discrete communities, $20 million for playground and tuckshop upgrades, and $3.6 million to plan and design 18 new school halls and performing arts centres.

“There will also be $5 million from our maintenance budget set aside especially for painting projects at our smaller schools.

“The 2022-23 State Budget will allocate $200 million to build the essential infrastructure needed to unlock housing supply, funding the delivery of water and sewer infrastructure to create more residential lots in new communities,” he said.

“This investment supports the ongoing delivery of our $1.9 billion Queensland Housing and Homelessness Action Plan 2021-2025 announced last year, which will result in the construction of 7400 new dwellings across our state.

“We remain focused on tackling cost-of-living pressures too, with $6.8 billion available for a range of health, energy, water, transport and housing concessions, a 10 per cent funding increase that includes $385 million for this year’s $175 cost of living rebate.”

Premier Annastacia Palaszczuk said her government would make the single largest investment ever, $262.5 million, to expand the state’s network of protected areas.

“Queenslanders have made it clear: they want us to continue to act on the environment, and that’s what this budget does,” the Premier said.

“This multimillion-dollar investment will go towards creating new national parks and supporting the 17,000 jobs that rely on the tourism our protected areas generate.

In addition, the record 2022-23 police budget includes $2 million to support work on the business case for the relocation of the Oxley Police Academy to the Wacol police precinct, which currently already includes the world-class Bob Atkinson Counter Terrorism and Community Safety Training facility.

“Works are ramping up on the M1, Bruce Highway, and on the $2.1 billion Coomera Connector,” he said.

“Driving from Coolangatta to Coolum, Queenslanders can see just how many major upgrades are going on through that corridor.

“That’s the major work we are delivering right now, while also planning for the future with a range of planning studies and business cases funded through this budget to detail what’s needed next across the region.”

$785.5 million investment over four years, including key investments such as:

With a 10-year freeze on coal royalty rates expiring at the end of the month, Mr Dick has announced a new arrangement.

Our existing coal royalty tiers were primarily designed for lower coal prices, with a top tier at $150 per tonne, with royalties charged at 15 per cent.

“However, with coal recently trading at over A$500 per tonne, our current rate structure is clearly no longer fit for purpose.”

Mr Dick said that, to reflect the new price levels being achieved, three new progressive coal tiers would be introduced on 1 July 2022.

“Importantly, the higher tiers only take effect on the portion of the royalty price above the relevant price,” he said.

“For example, if coal prices are A$302 per tonne, a very high price by usual standards, the 40 per cent tier will only apply to the $2 portion.”