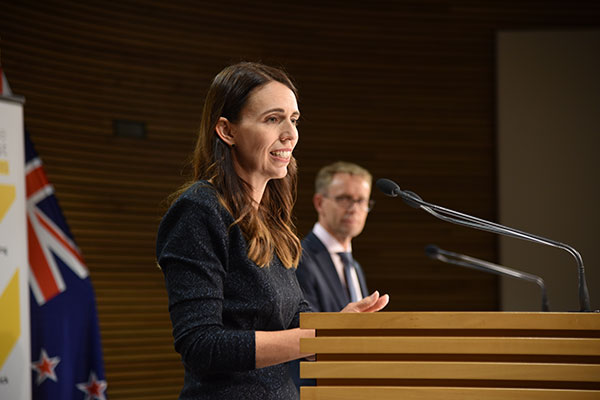 Ms Ardern's cabinet will meet to sign off a plan to create the trans-Tasman bubble on Tuesday morning, before a 4pm local time (2pm AEST) announcement.

The prime minister has remained tight-lipped on possible start dates, but Air NZ may have given the game away.

The national carrier is selling a vastly increased number of quarantine-free flights across the Tasman from April 19.

In Wellington on Tuesday morning, Ms Ardern said "they do not know cabinet's decisions. We have not told them the date we will be opening".

Ms Ardern said she was pleased to finally be able to announce a date, after a tortured 11-month journey from when it was first agreed in-principle last May.

"The public, tourism operators, families and friends will have that certainty," she said.

"I'm a Kiwi like everyone else ... I have family and friends in distressing situations because we have had this border in place.

"We are now able to take this next step and it is a world-first."

Australian and NZ borders have been shut to almost all non-citizens since March last year, with both countries requiring arrivals to spend a fortnight in quarantine before entering the community.

University of Auckland professor Shaun Hendy told a cautious Kiwi public that re-opening was worth the risk.

"It's not greatly increasing the risk to New Zealand ... we are going to have to make these small incremental risks," he told Radio NZ.

"We do want to get something like normal life back over the next year."

Families separated by the Tasman Sea have been among the loudest voices calling for a resumption of normal travel.

Tourism-related industries and businesses are also desperate for travel to resume.

"We're all looking forward to hearing what the NZ government has to announce," Auckland Airport executive Scott Tasker told AAP.

Mr Tasker was one of 40 representatives - including airports, airlines and government officials - in the Trans-Tasman Safe Border Group which last June put together a logistical plan for aviation to resume safely.

"It was to really provide a blueprint to both governments on how trans-Tasman quarantine-free travel could could function," he said.

While Australia picked up the report and put it into action, NZ left it on the shelf.

"It's pleasing to see that the New Zealand government now obviously do see that conditions are conducive to some serious thinking about the possibility of opening."

In any re-opening scenario, borders would be closed temporarily in the case of new outbreaks.